We farm in southeast Colorado, in the state’s semi-arid, 15-inch rainfall area.  The elevation is around 4,500 feet and our relative humidity is dry most of the time.  Typical dryland crop rotations include wheat, grain sorghum, summer fallow.  Corn is also grown on dryland along with various other crops including sunflowers, feed, with a few acres planted to oats, triticale, and millet in some years.

We took over a dryland farm in 2018 where the crops from the previous year appear to have been abandoned and left standing in the field.  The field was also being terraced by the previous owner in an effort to slow down the field runoff generated from a tilled system with a sloping drainage running through the middle of the field.

The spring started off fairly dry while the wheat from the previous failed crop had volunteered.  Between the terraces the residue was fairly good; however, all of the residue was removed where the terraces were installed.  In late May we sprayed out the volunteer wheat and waited for an opportunity to seed a crop.  Within a couple of weeks, it began to rain a bit more and then by the middle of June we received average moisture by June 15.  On June 22, a large rain and hail storm with over 2” of moisture came thru and filled the terraces with runoff and hammered the residue flat.  Knowing we had fairly good sub-soil moisture from the recent rains, we late-seeded grain sorghum without any starter fertilizer in a field that had not been fertilized in a few years.

The Execution of the Plan

Shortly after seeding in fairly wet conditions we received 0.6” of rain before the end of June which ensured that we would get good germination from our recent planting.  On July 2 we received nearly 2” of rain overnight and the terraces were brimming full from the runoff once again.  We seemed to be set up for a good crop year on these acres despite our setbacks with the terrace installation and the intense hailstorm prior to planting.  It seemed that if we could get one more good soaker in the next 30 days, the crop would be made.

Unfortunately, the weather pattern changed overnight and the remainder of July was hot and dry with no further rain.  August is normally reliable for rainfall however it started off hot and the rains stayed away.  The crop continued to look good and improve and we decided to foliar apply 2 gallons of XRN to the crop and hopped that we would get a good rain before the end of the month.  On August 26 we received 0.6” for a total of 3.2” rainfall from the time the crop was planted until a killing frost.

Precipitation was 38 percent of normal following planting as the monsoon moisture never developed.

At the beginning of August, the crop looked especially good in the terraces where all of the water was standing in early July.  The crop outside of the terraces where we kept our residue in place seemed to be lagging which is part of the reason that we decided to foliar apply the 2 gallons of XRN to the crop.  Over the course of the month, the crop in the wheat residue continued to improve but the crop seeded in the terrace bottoms began to wither. By the end of August, the appearance of the crop in the terrace and the appearance of the crop outside of the terraces completely reversed and we had a thriving crop over most of the field in spite of the noticeable lack of rainfall during most of the growing season.

Clearly, what we did on these acres may not have looked too flashy from the road. In fact, my neighbor asked me in early August if I had planted headless milo.  But here’s what our neighbors couldn’t see:

We were able to 1.) keep a living root in the soil within 30 days of planting a cash crop; 2.) grow a good crop with very little added fertilizer; and 3.) grow a cash crop without any additional weed control.

Conventional wisdom would all say “That can’t be done here.” But it was.  In fact, this may be the best grain sorghum crop that I have ever grown and, ironically, it was grown on half of the moisture as my previous best.

We took over a leased farm in 2009 that had a long history of tillage as well as significant soil losses by both wind and water.  A portion of the field consistently lagged the remainder of the field in yield and most of the field was very sandy with soil organic matter between 0.5-0.7%   The farm also had a fair amount of noxious weeds and prior to 2019 we had never been able to graze the acres due to a lack of water and related infrastructure.

In 2018 we late-seeded the farm to rye in an effort to improve cover and infiltration and to address some of our weed control issues that persisted since the beginning.  In late December we received some snow and the crop was finally able to begin germination.  By April that crop began to grow; however, we noticed some weed issues on the portion of the field where we had observed a yield drag.  As a potential remedy, I spoke with a neighbor about bringing in a load of light cattle and parking them on approximately 80 acres for about 30 days to see if we could use the cattle as a tool to manage the weed pressure and to help jump start to soil function on these acres.

The cattle did well and we continued to monitor our progress on the weed issues through the later part of May and in early June it began to rain on these acres.  By mid-June the cattle had cleaned up most of the weeds; however, they had also eaten most of the rye cover.  I didn’t like the lack of cover so I went into my barn and noticed some old millet seed and some alfalfa seed and I decided to plant those acres with the leftover seed from a few years back.  When I began to seed the crop, the cattle were still grazing the rye and the weeds.  The night that I finished planting the mix we received 1.25” inches of precipitation and things were looking up for this project.  Prior to germination, we sprayed out the remaining living cover including the weeds and the rye.  We seeded 13 pounds of millet along with 2 pounds of alfalfa and 1 pound of sugar.

Unfortunately, the weather pattern changed overnight and the remainder of July was hot and dry with no further rain.  August is normally reliable for rainfall however it started off hot and the rains stayed away.  The crop continued to look good and improve and we decided to foliar apply 2 gallons of XRN to the crop and hopped that we would get a good rain before the end of the month.  On August 18th we received .85” or a total of 2.05” rainfall from the time the crop was planted until a killing frost.

At the beginning of August, the millet and the alfalfa were really struggling due in part to the lack of moisture and the lack of soil function noted earlier.  As an experiment, we foliar-applied 2 gallons of XRN to the crop and hoped that we would pick up some rain in the next few weeks.  When times got tough, many of our forefathers would take an extended vacation to the mountains or somewhere to just get away from the unpleasantness of drought conditions.  I did the same.

To my surprise, when I returned from my vacation, it was much like a suitcase farmer from the days of old returning at the end of the growing season to find a crop that actually appeared to be thriving under conditions where most crops would have withered and died.  As I walked the field, I was surprised to not only find the millet making seed, but I also found alfalfa growing as well.

What was behind this pleasant surprise? On these acres we are able to (1. integrate livestock for weed control and improved natural fertility; 2.) plant into green growing rye that was being grazed; 3.) increase residue while keeping a living root throughout the year; and 4.) harvest a millet crop to cover our expenses.

We took over a farm in 2009 that had been enrolled in the Conservation Reserve Program (CRP) for 20 years with the idea of putting it back into crop production.  The soils were fairly good, however they were not fully functioning in spite of having a permanent perennial cover, because there had not been any livestock grazing on these lands for many years.  During the time it was in CRP, it was burned once for mid-contract maintenance.

In the early going we had seen some presentations that suggested we might need to till these lands just to smooth them up.  In spite of out attempts to suppress or remove the native grass it just kept coming back in both drought and in the good years.  In 2014 we gave up on trying to get rid of the grass and we began to experiment with pasture cropping on these acres. We seeded rye and then we grazed out part of the acres in 2015 and hayed another portion.  The hay crop was the best that we had ever fed and the heifers did well on the acres that were grazed out.

After the acres were grazed, the natural diversity really began to express itself and the grass stand continued to thrive.

The Execution of the Plan

In 2018 we again seeded rye into the perennial stand of warm season grass with the idea to graze it out again in the spring.  The spring of 2019 started out dry but by late May the rains began to fall the rye began to grow.  We turned in some open heifers that we had purchased along with a nice bull and began our grazing plan with the idea that we might do a switch back or two and then move back to the ranch.  While it was raining, the rye, clover, and warm season grasses were thriving and the cattle were in good flesh.

Unfortunately, when it stopped raining in late June, we ended up going through the rest of the growing season on approximately 2.25” of moisture; however, both the cattle and the grass appeared to be doing better than the cattle grazing on native grass.

When it began to dry up, I watched the cattle and they seemed to stay in good condition and the warm season grass stayed green after the rye had matured.  In comparison, I looked at another field where we had been doing a similar rotation in the past, but it had not been planted to rye in 2018 nor had it been grazed through the first week of September.  The grass stand on these acres was not nearly as vibrant and healthy in appearance as the warm season grasses on the acres where we had seeded the rye and grazed the heifers.

Three crops in one, as the clover begins to emerge in the warm-season perennial grass stand as the rye is finishing up in June

By implementing these regenerative agricultural principles, we were able to 1.) seed a cool season annual in a warm season perennial grass dominated stand that was grazed out; 2.) capture a decent return on these cropland acres without using traditional farm inputs; 3.) achieve a 100 percent breed-up with our heifers with 90 percent of them breeding in the first cycle, which is the best that we have ever done with our bred heifers; and 4.) realize an increased value in the heifers, which amounted to a value of $100 per acre for the season.

What’s the real value of your farm’s carbon? Let’s do the math.

Time for change: The compelling case for regenerative agriculture 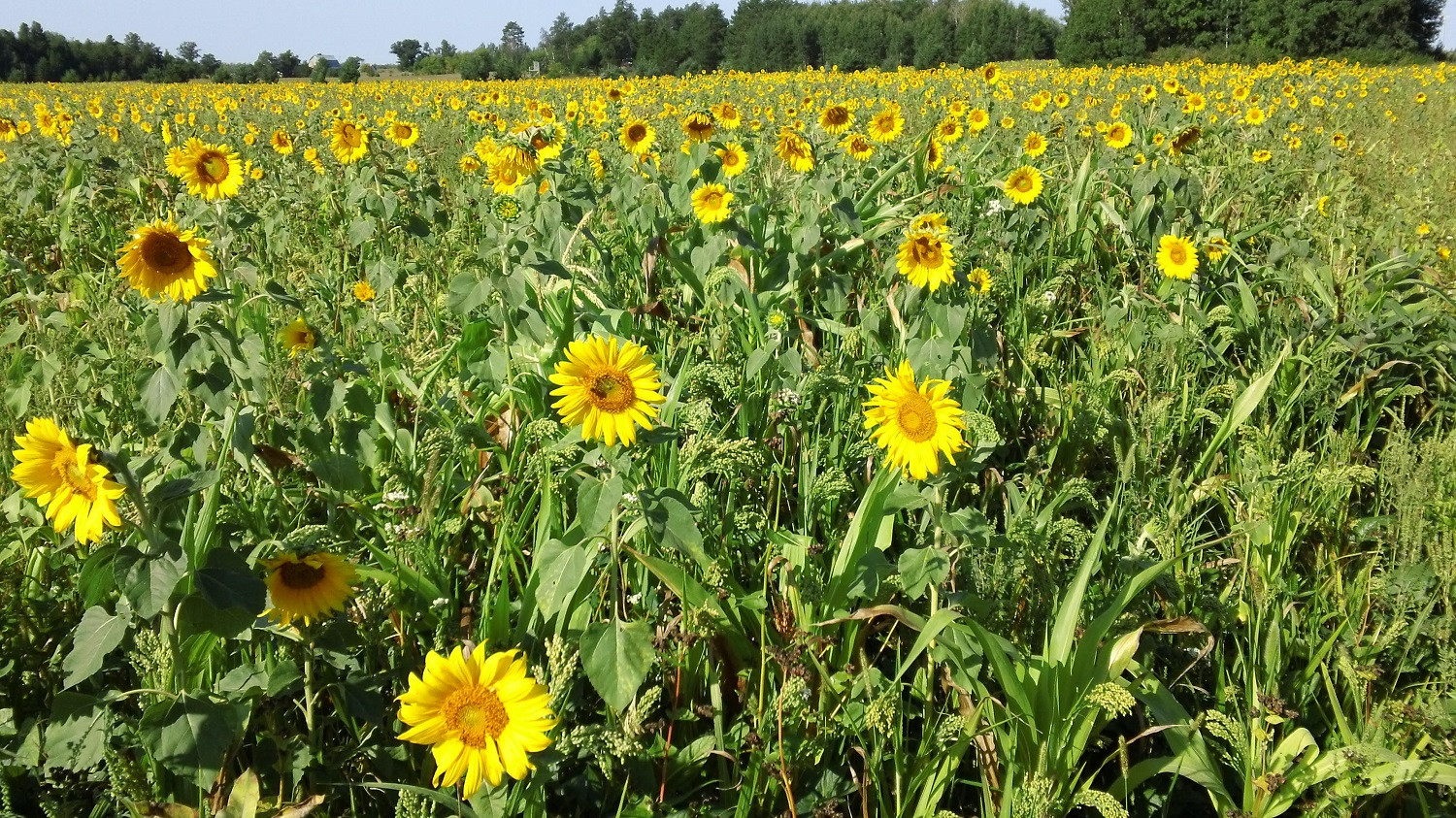